Gold was little changed on Wednesday in the wake of minutes from the latest U.S. Federal Reserve meeting, but the precious metal was trading above the two-week low hit in the last session as stock markets slid on fresh trade tensions.

The minutes from U.S. Fed’s last meeting showed policymakers agreed that their current patient approach to setting monetary policy could remain in place “for some time.”

“Not many surprises here and not many were expected. I would note though that this Fed meeting happened before China backtracked on the trade talks. At the next meeting, almost certainly there will be more caution,” said Tai Wong, head of base and precious metals derivatives trading at BMO.

Silicon metal is a grey, lustrous semi-conductive metals that is used in the manufacturing of aluminum alloys, steel, solar cells, and microchips.The silicon metal acts as a raw material for a large number of industrial and consumer products such as sealants, adhesives, lubricants, coatings, and polishes.

Increasing demand for automobiles, portable electronics, and solar panels is expected to be a major driver of the silicon metal market during the forecast period.

This report analyzes and forecasts the silicon metal market at global and regional levels.The market has been forecast based on volume (Kilo Tons) and value (US$ Mn) from 2019 to 2027, considering 2018 as the base year.

The report also highlights opportunities for the silicon metal market at the global and regional levels.

The report includes detailed value chain analysis, which provides a comprehensive view of the global silicon metal market.Porter’s Five Forces model for the silicon metal market has also been included to help understand the competition landscape of the market.

The study encompasses market attractiveness analysis, wherein application segments have been benchmarked based on their market size, growth rate, and general attractiveness.

Initial weekly U.S. jobless claims fell by 10,000 to a seasonally adjusted 202,000 in the week to Saturday, the Labor Department reported Thursday.

Consensus expectations compiled by various news organizations had called for initial claims to be around 216,000. The government revised the previous week’s report up by 1,000 to 212,000 claims.

Meanwhile, the four-week moving average for new claims – often viewed as a more reliable measure of the labor market since it smoothens out week-to-week volatility – fell by 4,000 claims to 231,500.

Continuing jobless claims, the number of people already receiving benefits and reported with a one-week delay, dropped by 38,000 to a seasonally adjusted 1.717 million during the week ending March 23, the government said.

LONDON–(BUSINESS WIRE)–Apr 4, 2019–The global oral care market is expected to post a CAGR of over 3% during the period 2019-2023, according to the latest market research report by Technavio.

The global oral care market will post a CAGR of over 3% during the period 2019-2023 (Graphic: Business Wire)

Poor oral health and hygiene give rise to several issues such as plaque formation, periodontal disease, tooth decay, and even throat cancer. Consumption of tobacco, poor oral hygiene, unhealthy diet and high consumption of alcohol are some of the factors that can result in oral disorders. To avoid the occurrence of such disorders market players and the governments of different countries are raising awareness on the importance of maintaining dental and oral health. For instance, Colgate-Palmolive has its oral care center that offers information on teeth whitening, cavities, gum disease, and others. The growing awareness of dental and oral health will propel the volume sales of oral hygiene products leading to market growth during the forecast period.

(Kitco News) – Gold and silver prices are posting moderate corrective gains in early-morning dealings Friday, following the sharp losses suffered Thursday. Overnight, gold did drop to a three-week low, while silver hit a three-month low. Some mild U.S. inflation data just released is also helping out the precious metals market bulls. April gold futures were last up $6.10 an ounce at $1,295.90. May Comex silver was last up $0.122 at $15.09 an ounce.

The just-released U.S. personal income and spending report for February came in at up 0.2%, which was in line with market expectations. The January personal consumption expenditures price index came in at down 0.1% from December and up 1.8%, year-on-year. Personal spending in January came in below expectations, at up 0.1% from December. These numbers fall into the camp of the U.S. monetary policy doves, who do not want to see U.S. interest rates rise anytime soon. Metals prices did up-tick after hit report hit the news wires.

Asian and European stock indexes were mostly firmer overnight. U.S. stock indexes are pointed toward slightly higher openings when the New York day session begins. Today is the last trading day of the week, of the month, and of the quarter, which makes it an extra important trading day from a charts and technical perspective. Traders and investors are exhibiting a bit more risk appetite late this week, which has buoyed world stock markets but has helped to sink the safe-haven gold and silver markets.

The U.S. and China held high-level trade talks in Beijing late Thursday and Friday. U.S. Treasury Secretary Steven Mnuchin said those talks were productive. However, Larry Kudlow, President Trump’s economic advisor, said on Thursday any final U.S.-China trade accord is likely to come months down the road. There is no clear consensus in the marketplace on the eventual outcome of the U.S.-China trade talks, which means that when any final result is announced it is likely to cause at least some volatility in some markets.

The U.K. Parliament is likely to vote Friday on another option offered by Prime Minister Theresa May to break the Brexit deadlock. There are not high expectations for her latest plan to be approved by the MPs. Today is the day the U.K. was set to leave the European Union. May’s options moving forward on the matter are increasingly limited, with speculation of a general election being held in the near future.

The key outside markets today see the U.S. dollar index higher and hitting another 2.5-week high today. The USDX is back near its recent multi-month high. Meantime, Nymex crude oil prices are higher and trading around $60.00 a barrel. Oil prices are still trending higher on the daily bar chart even though price action has been sideways this week.

Feb 15 – Gold jumped to a two-week high on Friday after weak U.S. economic data boosted expectations the U.S. Federal Reserve would hold pat on monetary tightening, while palladium matched an all-time high on a prolonged deficit.

While gold is on track for a small weekly gain, it was rangebound for most of the week, with gains on Friday stemmed by a firmer dollar and a rebound in stocks.

Risk appetite in equity and forex markets and positive US dollar in the broad market caused precious metals to decline in broad market.

Precious metals today saw sharp downside move as market scenario returned to normal following an eventful month. Given the fact that there is no major market altering events in the week ahead and the fact that market is set to see a week full of first tier macro data updates, investor sentiment is positive with plenty of risk appetite across all major global markets. Further US Dollar gained strength in the broad market following upbeat US NFP data and ISM Manufacturing PMI released last Friday. The dollar has retained its strength across Asian and early European market hours which also added to precious metal market bears.

Brent Crude Climbs Above $60 Per Barrel

Gold prices posted a slight decline on Monday, holding above $1,230 an ounce for a third straight session as traders eyed some weakness in the U.S. dollar a day ahead of the closely watched midterm elections.

“Stepping back from today’s price action, what is most interesting for gold is how well it has held its ground despite a significant rally in the U.S. Dollar Index in recent weeks,” Michael Armbruster, managing partner at Altavest, told MarketWatch. “When it comes to gold, it’s easy to be lulled into a sense of complacency when the U.S. dollar is trending higher along with interest rates.”

The contract ended last week slightly lower after a report showed a U.S. job market that was even stronger than expected—data seen keeping the next Federal Reserve interest-rate hike likely on track for December. Higher rates dull the appeal of nonyielding bullion, while boosting the dollar, making dollar-priced commodities less attractive to investors using other currencies.

Still, data Monday showed the nonmanufacturing index compiled by the Institute for Supply Management slipped to 60.3 last month from a 21-year high of 61.6 in September.

The dollar continued its decline after the ISM services survey, with the ICE U.S. Dollar index DXY, -0.06% down 0.3% at 96.286 in Monday dealings. Last Thursday, gold settled at its highest level in more than three months when the index weakened and as stock markets wrapped up a dismal October.

“Increased risk aversion with the equity markets’ selloff has certainly added a risk-averse boost to gold in recent weeks, but if the dollar starts to lose traction due to the reversal of the U.S.-China trade dispute, then this could be a driver of continued gold strength,” said Richard Perry, analyst at Hantec Markets.

Perry is watching $1,236 as a technical “line in the sand” for gold and says a consistently higher market at that price opens the way to a climb toward $1,266.

Armbruster pointed out that “investors should keep in mind that central banks around the world (China, Russia and others) are reportedly adding to their gold holdings. Such behavior by central banks may trump headwinds from the dollar and interest rates and result in a surprise rally.” 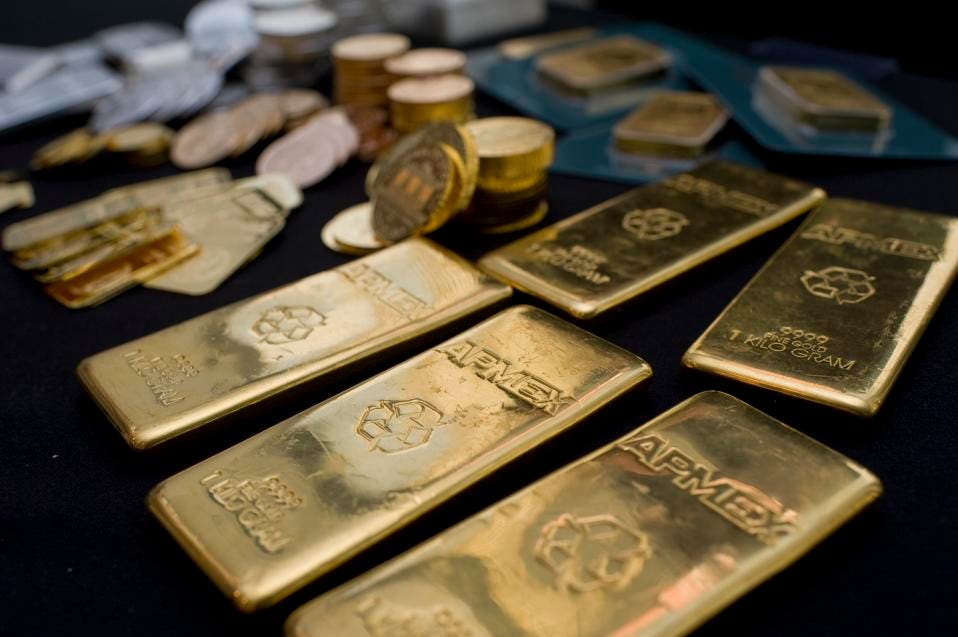 Gold Bars by Pixabay on Pexels.com

(Reuters) – Gold prices fell on Thursday on a strong dollar and a rebound of stocks following a multi-day sell-off globally, taking steam out of bullion’s momentum.

Prices had risen to $1,239.22 earlier, near a more than three-month high of $1,239.68 hit on Tuesday as the stock market sell-off spurred interest in gold, considered a safer investment.

“With equities being higher today, gold is unable to sustain a rally,” said Bob Haberkorn, senior market strategist at RJO Futures, adding that investors looking for safety are opting for Treasuries instead. [US/]

“Normally you would see gold trading significantly higher with this volatility, concerns in equity markets and global economic slowdown. But the fact that the U.S. Federal Reserve is hawkish, gold is having a hard time sustaining any rallies.”

The government said earlier that the number of Americans receiving unemployment benefits fell to more than a 45-year low, a sign to tight labour market conditions. That will likely keep the U.S. central bank on course to raise interest rates again in December. [nUSNPLEEMN]

Prospects of higher U.S. interest rates are negative for dollar-priced gold as they raise the opportunity cost of holding the bullion.

“The options expiry on Thursday is also dampening volatility in gold as between $1,225 and $1,230. There were about 1.5 million ounces of options that were open, allowing people to play around the range,” said Tai Wong, head of precious and base metals trading at BMO.